The Crane Clan is a Great Clan led by its Champion Doji Hotaru.

To the rest of the Empire, the Crane are a study in contrasts. They are both respected and hated for their achievements, both admired and envied for their elegance and grace. They are the makers of beauty and beauty itself, devotees of peace and civility who nonetheless wield lethal blades. From the Crane's impeccable garments, which set the standards for style in the Empire, to the sprawling beauty and wonder of their Fantastic Gardens, to their seemingly limitless talent for artistic accomplishments and political dominance in Rokugan's courts, the Crane don't simply define what it means to be a civilized Empire—they are the very civilized essence of Rokugan.

The Crane are known throughout the Emerald Empire as a political powerhouse, with wise and honorable courtiers guiding the clan and protecting themselves from external threats. In the game, you must leverage this political might to devastate your opponents during conflicts, keeping your characters honored to increase their skill and controlling the board by pushing your opponent's characters away.[1] 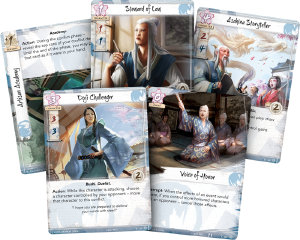 Cards of the Crane Clan