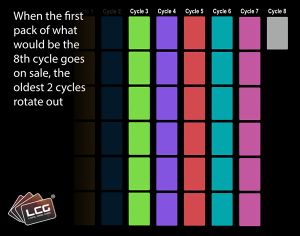 Rotation of the Cycles

Each cycle of the L5R LCG will be composed of 6 Dynasty Packs.

Cycles, as the name suggests, cycle in and out the game, thus the cards in the cycles remain only for a certain time in the tournament legal format. Under Fantasy Flight Games' previous rotation format, once the 8th cycle is added to the format, the first two cycles are removed from the format.[1] However, on May 23, 2019 they announced that the L5R LCG would follow a shorter rotation format. The 5th cycle would cause the 1st and 2nd cycles to rotate out. Meanwhile, Clan Packs will stay legal until another pack for the same clan is released. Premium Expansions, such as "Children of the Empire" would rotate on a case-by-case basis. [2] On December 27th, 2019 before the first rotation happened, it was announced that rotation of the cycles would follow the usual FFG rotation format. [3]