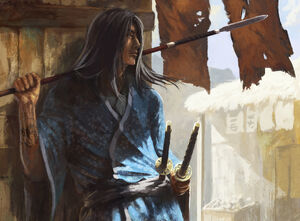 The Daidoji family are the guardians of the Crane Clan and make up most of its army.

The Daidoji are a branch from the main Doji Family, split off shortly after the end of the First War. The family exists to be the silent guardians of the Crane: practical warriors who can solve the problems they face, be it on the battlefield as bushi or scouts or in the marketplace as capable merchants. While they value honor as much as any in their clan, they are also willing to sacrifice their personal honor if it means helping the Crane or maintaining the honor of the clan's other families.

The fashion of Crane samurai bleaching their hair white on reaching adulthood originates with Daidoji family founder Doji Hayaku. After the Day of Thunder, Hayuku ventured into the Shadowlands alone in search of the Crane Clan's Thunder, his sister Doji Konishiko. Whilst he did not find her, he did return with the clan's ancestral sword Shukujo, and was honoured for his efforts by being made daimyō of the new Daidoji family. His time in the Shadowlands had rendered his hair completely white, so many among the Crane chose to bleach their own hair rather than let him stand out as an oddity among them. This practice was passed down as a tradition to honour Doji Hayaku ever since.