The Lion Clan is a Great Clan led by its Champion Akodo Toturi.

The Lion are a proud, aggressive, and violent clan that leverages its strong military skill to win conflicts. Lion decks frequently aim to swarm the play area with characters, strengthening their presence through numbers. However, Lion characters with political skill are harder to come by, so it's important to have some extra fate to keep your few courtiers and politicians in play.[1] 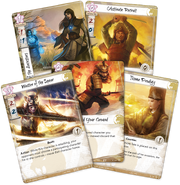 Cards of the Lion Clan