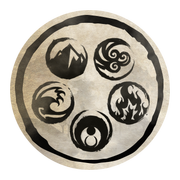 Each Province has a Ring associated with it. This Ring is used in deckbuilding. [1]

When a player declares a conflict in the Conflict Phase, they also select one of the five Rings. Any fate on the ring is moved to the attacker's fate pool at this time.

The winner of the conflict claims the ring for the round and, if the attacker wins the Conflict, they gain the following benefit based on which Ring type was chosen:[2]

Rings can be in one of three distinct states.

The Book of Five Rings written by Miyamoto Musashi is the source of inspiration for Legend of the Five Rings and the five Elemental Rings in particular, even though it calls the Air Ring the Wind Ring and orders them in a different way.