As part of Project Crossover, this wiki is scheduled to be archived in favor of the Fandom equivalent. If you object to this wiki being archived, please say why on the community portal discussion page. If there are no objections by August 9, 2020, this wiki will be archived. 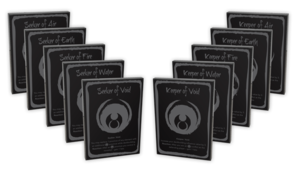 Role cards are used in organized play.[1] If used the role card is put next to the stronghold card, and modifies the deck construction options as well as options of playing the deck.

The first set of roles were selected during Gen Con 2017.

At the closing of the 2019 Winter Court, the top of clan finishers all chose to Free the Roles, at this time, any released role can be used in Organized Play.

Previously, at the launch of the game roles changes once a year during each Winter Court World Championship. 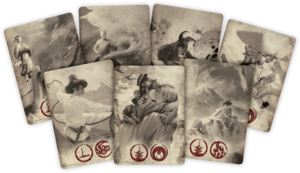 The roles resulting from the Elemental Championships 2019 will last only six months instead of eight, as they will be replaced immediately upon the new roles being chosen at Winter Court, as transition to an adjusted Role Rotation schedule for 2020.

The elemental roles chosen at the Winter Court World Champion will be drafted by each clan's top finisher in the event.