With six terrible words, the Kami Bayushi set his followers in the newly founded Scorpion Clan on a dark and dangerous path. Enemies loomed beyond Rokugan's borders, but they also lurked within them. Bayushi swore to protect the Empire by any means necessary. Where the Code of Bushidō tied the Emperor's Left and Right Hands-the courtiers of the Crane and the mighty legions of the Lion-the Emperor's Underhand could still reach. To combat the liars, the thieves, and the traitors within the Great Clans, Bayushi's followers would have to lie, steal, and cheat in turn. The weapons of the Scorpion became blackmail and poison and sabotage. The Scorpion dirtied their hands so that others' could remain pure.

Yet in spite of-and perhaps because of-the clan's fearsome reputation, there is none more loyal than a Scorpion. In a clan of deceivers and manipulators, trust is a hard-earned treasure to be cherished and guarded. Such fierce loyalty is a small consolation, at least, given the dangerous but vital role the Scorpion have played in the Empire from the moment their Kami spoke his fateful words: "I will be your villain, Hantei."

While playing the Scorpion Clan, you'll want to make high honor bids in order to draw extra cards and surprise your opponents with potent tricks and traps. Yet you must always maintain your deepest loyalty, lest you lose all honor and the game. Dishonor is also a powerful tool when turned against your foes to keep their skill low and their hopes of beating you in conflict even lower.[1] 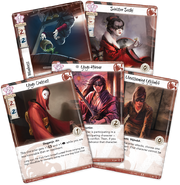 Cards of the Scorpion Clan