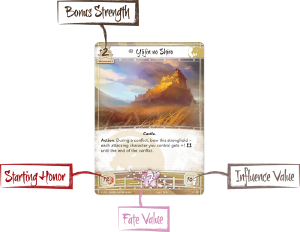 Stronghold is a card type. Every stronghold has a bonus strength (

Breaking an opponent's Stronghold is one of the three victory conditions of the game.

"At the beginning of the game, a card from the top of your dynasty deck is placed on top of each of the four province cards between your [Dynasty deck and your Conflict deck], while the fifth province hosts your stronghold.

Breaking enemy provinces moves you directly closer to victory in Legend of the Five Rings: The Card Game. Though your opponents can still play new cards from their broken provinces, if you break three of your opponent’s four provinces, you will be allowed to declare conflicts against their stronghold.

A clan’s stronghold is the seat of its power, providing your supply of fate, determining your starting honor, and offering a powerful ability that can be used throughout the game. Underneath your stronghold, you’ll place a fifth province card at the beginning of the game, like the four province cards that you’ve placed between your dynasty deck and your conflict deck. Your opponent’s stronghold will be the site of a dramatic final conflict, and whether that takes the form of a military siege or a measured political negotiation is up to you. Either way, if you can break your opponent’s stronghold province (after breaking three of his other provinces), you immediately win the game."[2]