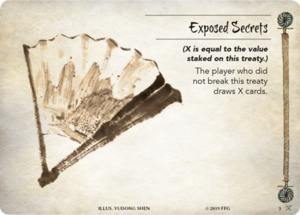 Treaty is a card type introduced in the Clan War Premium Expansion. When using treaty cards, you simply select a random card when forming a treaty and place the honor value on it. When a treaty is broken, the player who broke the treaty reveals the card and resolves its text. [1] 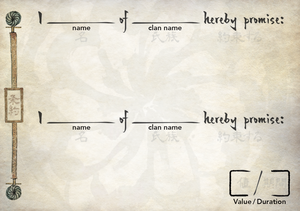 A treaty pad allows players to formalize alliances. When players make a treaty, they fill out the top form of the treaty pad to confirm what is being promised by each player, how long the treaty will last, and the value of the treaty. Each of these fields must be agreed upon by both players. The value essentially determines how much honor a player will lose should the terms of the treaty be broken. This incentivizes players to uphold their treaties, unless the perfect opportunity comes along.